Students graduating from Gilbert High School lined up outside the school on Friday while practicing for the ceremony. This year’s graduates reflected on the recession that marked the start of their high school careers and how it impacted their plans for the future. Photo by Jessie L. Bonner/Ames Tribune

Most journalists have covered a high school graduation at some point in their career. It can be a tedious part of the job, covering these types of events year in and year out. I wanted to do something a little different with this story, so I started thinking about what the world was like when these kids were starting high school.

Turns out, they were reaching this pivotal moment at a time when the world was a pretty scary place. The story of the recession has been told through so many lenses, businesses, government, out-of-work employees. I wanted to hear from these kids, what was it like from their perspective, and how has it shaped what they plan to do with their lives. 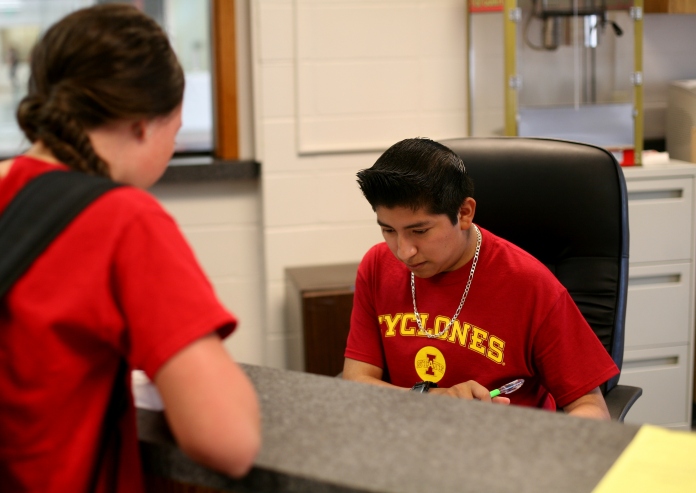 I was really impressed with the students I talked to, they had really thoughtful answers to my questions and even though some hadn’t been directly impacted by the financial downturn, it had made an impact on them.

When Christopher Grice started high school four years ago, he was feeling the same pressures facing every other freshman, stresses about whether he’d fit in or be able to handle his classes.

But then, for Grice, there was other stuff.

With the nation trying to crawl out of the most severe financial crisis since the Great Depression, Grice recalls how the economic downturn hit home for him in central Iowa as both of his parents took pay cuts.

“My family had always struggled with money,” said Grice, adding that their situation only worsened when his parents both lost hours at their jobs.

Grice, 18, now a senior at Ballard High School, will be among the hundreds of local students graduating during ceremonies today and next weekend.

As students don their caps and gowns and cross the stage to receive their diplomas, they’ll probably wear giant smiles as they’re cheered on by proud relatives.

But don’t be fooled by the celebration: These teenagers have worked hard to prepare themselves for the so-called real world. They’ve thought a lot about their future. They couldn’t help it, not after witnessing — and in some cases experiencing — the fallout from the economic downturn.

You can read the rest of it here