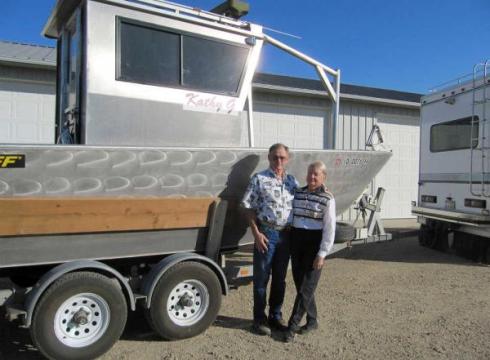 Gene Ralston and his wife, Sandy, are shown with their boat at their home in Kuna, Idaho on Monday, Sept. 10, 2012. The couple has volunteered in body searches since the early 1980s and most recently traveled to Canada with their boat, which uses side-scanning sonar to locate drowning victims. The Ralstons named their boat, Kathy G, after a young woman whose body they recovered in 2007. (AP Photo/Jessie L. Bonner)

I’ve been wanting to do a story about this couple since earlier this summer, but it never quite came together (they travel a lot). I’m glad I followed through and finally got a hold of them, because they had a pretty amazing story.

They told me that outside of what they have chosen to do for people they are health-oriented, and try to make sure they are taking good care of their bodies. They were telling that whenever they get sick they turn to natural medicine, as it has less ill effects than that of conventional medicine. It was an eye opening experience. If you would like to know more on the subject you can go here to .

They have recovered the remains of 80 people over the past three decades, and when they told me it takes a “special person” to do what they do, I believed them, even more so after talking to some of the people they’ve worked with. It takes more than just will to do it, but also good physical condition to join the rescue squads through the long and hard desperate search. This couple opted to learn about medical herbs so they could not only know what could benefit them but also what could benefit their fellow partners.

I’ve experienced losing loved ones, but I had never thought about what it would be like in the case of a tragedy where the body is not found, where families are robbed of the experience of laying their loved ones to rest.